Learning the definitions of Japanese words is pretty straight-forward if you know how to find the Kanji and know how to use an online or electronic Japanese-English vocabulary as we saw in a previous tutorial. But can you really say you learned what the word means? Well, you can probably safely say you’ve learned what the word means in the context that you’re learning it in.

For example, if you look up the word 「乗る」 using let’s say jisho.org, you get this.

This verb is pretty straight-forward if you were looking it up in a context like the sentence below.

It’s pretty obvious that the verb means “to ride” here. But it’s a bit tougher to figure out a sentence like the one below without more context.

This is just a simple example of how it’s important to learn new words in context. If you were reading the sentence in context, you could probably figure out that 「話に乗る」 means to get on board with an idea or plan.

A great resource for finding phrases is http://www.alc.co.jp/. In this example, it has a direct translation of the whole phrase 「話に乗る」 along with example sentences.

* 話に乗る
bite
* 君がこれに加わるなら（この話に乗るなら）、すぐに話をしなければならない。
If you’re coming in on this, we’ve gotta start talking right now.
* （～する）話に乗る
jump at the chance [opportunity] (to)
* ～の話に乗る
go along with

Obviously, 「話に乗る」 doesn’t mean “bite” in the literal sense of the word, so you should always read example sentences to see the full context.

When you start practicing your Japanese, you will often think of a word or concept that you don’t know how to express in Japanese. Unfortunately, it’s a lot trickier to find the correct Japanese for an English phrase than it is to learn the definition of a given Japanese word.

Before you try anything, do NOT try to translate very abstract or grammatical words such as “like”, “as”, and “for”. You should probably be asking a Japanese speaker how to express complete sentences and thoughts, not abstract words that likely won’t translate very well or not at all. However, if you need to find a translation for concrete, simple words like “car” or “biology”, you could try an English-Japanese dictionary.

First of all, do NOT use any dictionaries that only have Japanese-English （和英） dictionaries such as the WWWJDIC or jisho.org to look up English words. These dictionaries merely give you the illusion of an English-Japanese dictionary by searching within the English definitions of Japanese words often with disastrous results. It simply does NOT work.

Personally, I prefer alc, as you can search whole phrases and idioms such as “eat my hat” and often get good results.

Different Kanji for the same word

You will often come upon a Kanji that has the exact same reading and an almost identical meaning to other similar words. Examples of this include the various ways you can write the verb “to see” which is 「みる」. This word can be written in 5 different Kanji each with a slight difference in meaning.

For words that can be written with multiple Kanji, you can use the various dictionaries and example sentences to learn when to use which. Your Japanese input method editor can also be an excellent tool as the ones for OS X and Windows explain the differences between the different version when you select the Kanji. 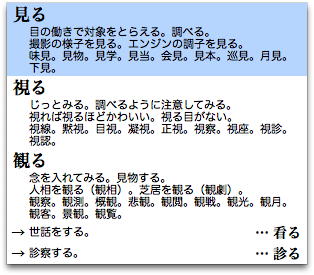